Jeanette K. Chan, a former China practice managing partner at Paul, Weiss, Rifkind, Wharton & Garrison, is leaving the firm after three decades to take up a role with Tencent-backed fintech “unicorn” Airwallex, ALB has reliably learnt. Chan will be joining as chief legal and compliance officer.

Joining Chan at Airwallex is Paul Weiss counsel Corinna Yu, ALB additionally understands. Yu’s practice focuses on mergers and acquisitions, private equity investments and foreign direct investments into China. She spent more than 20 years at Paul Weiss and will be joining Airwallex as director of legal.

The Hong Kong-based payment operator Airwallex did not comment on the two appointments.

Chan joined the U.S.-headquartered firm in New York in 1986. She briefly left Paul Weiss in 1992 when she relocated from New York to Hong Kong as a senior international legal advisor to British telco Cable & Wireless. After rejoining the law firm in 1994, she eventually led the China practice as well as the Asia communications and technology practice head. Chan’s stint as head of the China practice ended in December last year.

“Jeanette has made countless contributions to Paul, Weiss and our clients for more than three decades. She is celebrated as an innovative deal lawyer, a pioneering leader and valued mentor who has had a profound impact on the technology and media industries in Asia and well beyond. Our Paul, Weiss family wishes her well as she embarks on this exciting new chapter,” said Brad S. Karp, chairman of Paul Weiss, in a statement provided to ALB.

Airwallex, established in 2015 by four Chinese founders, gained “unicorn” status in March this year after closing a $100 million Series C round that valued its business at above $1 billion. It provides a service that lets companies manage cross-border revenue and financing in their business. Airwallex recently shifted its headquarters to Hong Kong from Melbourne. Tencent has been involved in both of the company's large funding rounds till date. 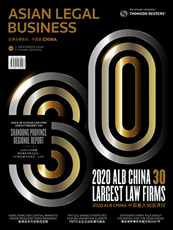